Our calling is to people groups who do not yet have God’s Word as well as for evangelism of the lost. 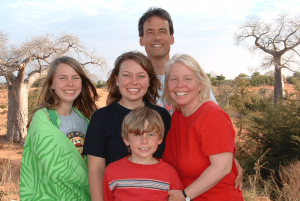 We began our missionary training in 1986. In 1990 we began doing Bible translation in the Democratic Republic of the Congo in central Africa. We worked with the Mayogo language group for nearly 8 years, learning their language as well as two other languages used in the Congo.

Later, part of our missionary experience has included serving at SIL’s International Linguistic Center in Dallas Texas. Ken served as the Administrator and Program Manager of a database that monitored the progress of Bible translation projects around the world. This information is vital for the strategic planning to reach the thousands of languages that do not yet have the scriptures.

While serving at the missionary center we were able to travel to several other countries and provide training in Bible translation. The training enables local workers to analyze the sounds and structure of their own language so that they can translate the Bible into their mother tongues. We also completed a Masters degree in linguistics in order to help the Mayogo Bible translation project in the DRCongo.

In 2004, our entire family moved to Zambia in south central Africa. Zambia has 42 different languages and about 10 of them have never had any of God’s Word translated into a written form. Besides Zambia, neighboring countries, like Tanzania and the Congo, also have many translation needs and we have been able to take trips to help the work in these countries as well as support co-workers stationed there.

Sue continues to help with the Bible translation and literacy work as well, and a major portion of her time is spent home schooling our children. In previous missionary terms she also ministered to women who wanted to leave prostitution. She met with them twice a week helping to disciple them, teach them to read and write and assisting them to find good jobs so that they will not return to prostitution.

Currently Sue is doing a Girls Club for young girls in our neighborhood. She also has a burden to start a ministry called “Crying Out Loud” which will target the prayer needs around the world.

In the over 28 years since we’ve been sent out to serve God as missionaries many more languages have received God’s Word for the first time. All of this has been possible because God has poured His love through a faithful team of people like you. Partners are people who have prayed faithfully and given sacrificially. You too can be a partner to help bring the message of God’s love around the world. Just click on this link for more information about how you can be part of the work.

We’d like to hear from you and learn more about you and your family.

We are so thankful for God's grace over the last 32 years as we have served the Lord in missions. It is possible because of His faithfulness through the team of partners who desire to see the Good News of Jesus spread to the ends of the earth. Read more.

Our ministry depends on your prayerful and financial support. Please consider giving using one of the links below.

Get Involved!
→ Click Here to Make a Donation
If you prefer PayPal: